Open to: All, detailed results viewable to: All. Participants: 24

Generally speaking, if you think that your friends or followers on Livejournal, Facebook, Twitter or Tumblr will disagree with your point of view on a certain topic, are you less likely to post about that topic?

If you post about a topic, and someone in a reply tells you that you're wrong, which of the following statements do agree with more strongly?

Hypothetical 1: You are liberal or conservative (chose one) and post something which alligns with that philosophy. A person at the opposite end of the spectrum comments and tells you why they say you're wrong. Which of these two statements is closer to your response?

I welcome and invite opposing points of view.
19(86.4%)
Liberals/Conservatives (which ever you're not) are morons. Why are they even reading what I write and how dare they spread their bs here?
3(13.6%)

Hypothetical #2: One of your LJ or Facebook or Tumblr friends posts a calm, non-ranting, analysis about why they think Hitler was right about some things. Which of the following statements comes closest to how you feel about that?

I may not agree, but I respect everyone's right to their opinion.
16(76.2%)
No! Hitler was responsible for the holocaust and no sane person would ever say anything supportive of him.
5(23.8%) 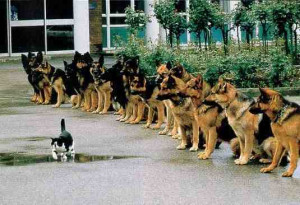